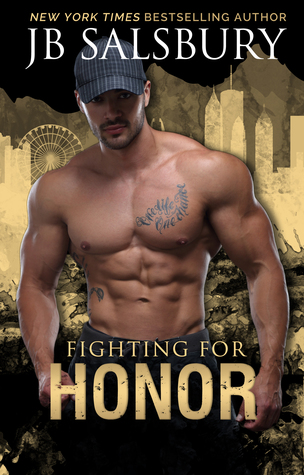 New York Times and USA Today Bestselling author JB Salsbury brings her Fighting series to Harper Sloan’s Hope Town in this Kindle Worlds exclusive, Fighting for Honor.UFL fighter Caleb hasn’t been to Hope Town since he was eighteen. His next big fight takes place in Atlanta and the serene lakefront home from his childhood is the perfect place to train without distractions.
Until he stumbles downstairs to find a woman in his house. He’s met her before, and he’s never forgotten.

Honor was raised by her grandfather, Crazy Colonel Cartwright. Ostracized at a young age she was an outcast. Combined with her awkward personality and she became the local bully’s favorite plaything.

Honor and Caleb come face-to-face and feelings from fourteen years ago come rushing back—not all of them good.

She prefers to remain unknown, but she’s seen in public with the world’s most talked about fighter and thrust into a national spotlight that catches the attention of her childhood tormentors.
And they aren’t finished with her yet.

This was cute! I loved it so much!

Caleb is such a great guy. I have a serious crush on him. I wouldn’t call Honor weak, more like beaten down. I’m glad the people who made her feel like she was nothing got what they deserved. I loved all the characters, and I loved the story.

While I was reading this, people from the Corps Security were being mentioned, and I was very confused, but delighted. At first I thought it was just a coincidence, but more characters from that series were popping up. I went and read the author’s message at the end of he book, and I got it then. It was such a great idea to have these characters meet!