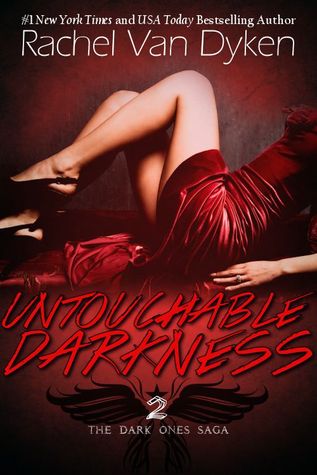 To love a Dark One is to invite death…

It is wrong to love her.
It is worse to want her.
It is sin to consume her.
I desire all three.

I’ve been given thirty days to prove my love to another immortal–as a human. Cursed to use nothing but the side of myself I’ve always despised to win her affection. I am Cassius, the King of the immortals, A Dark One.
And today I tasted fear for the first time.
How can I win her when my human emotions over take every ounce of logic I possess?
A darkness is brewing.
One I cannot stop as a human.
One that Stephanie, my loves visions, have shown, will be my end.
Thirty days ago I was King of the immortals.
Today I know fear.
Today I know how I will die.
By her hand.
The woman I love.

Cassius and Stephanie have now exchanged places. Cassius is made human, while Stephanie is made to be a dark one. Stephanie’s does not know how to handle her powers, the darkness is overwhelming her, and she needs Cassius to guide and help her.

This book was full of intrigue, and a lot of funny moments. One thing I was kind of disappointed about, was Cassius’ lack of wooing Stephanie. He didn’t need to, since Stephanie has been in love with him for a long time, but it would have been nice to read about it!

The story of Cassius’ parents was so sad! I wish there could have been a better ending for them, but I knew it was impossible.

Alex’s story is coming up next. I wanted Mason’s, but I guess Rachel is saving the best for last!

2 thoughts on “Review: Untouchable Darkness (The Dark Ones Saga #2) by Rachel Van Dyken”