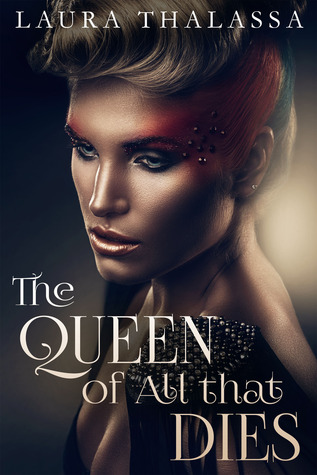 In the future, the world is at war.

For the last decade, King Lazuli of the Eastern Empire has systematically taken over the world. No one knows much about him other than a series of impossible facts: he cannot die, he has not aged since the conflict began, and he wants to rule the world.

All Serenity Freeman has known is bloodshed. War has taken away her mother, her home, her safety. As the future emissary of the Western United Nations, the last autonomous region of the globe, she is responsible for forging alliances where she can.

Surrender is on the horizon. The king can taste it; Serenity feels it deep within her bones. There is no other option. Now the two must come face to face. For Serenity, that means confronting the man who’s taken everything from her. For the king, it means meeting the one woman he can’t conquer. But when they meet, something happens. Cruelty finds redemption.

Only in war, everything comes with a price. Especially love.

This book had me going crazy. I did not know what I was supposed to think and view things because of it.

Serenity is the daughter of the Emissary of the WUN (Western United Nations). She is expected to be the next emissary, so she has to learn everything on how to be a great one. She lives in a world that is destroyed by war. Food and water are extremely scarce, and cancer is ubiquitous due to radiation.

They are losing the war and they know it. A peace treaty is needed, and that’s where Serenity comes in.

The King rules the eastern hemisphere and has been warring with the WUN for almost 15 years now. This man is evil. He has killed millions; it could even be billions! There is no doubt that this man is heartless, but when he sees Serenity for the first time his cold dead heart thaws.

“That first moment I saw you,” Montes says, “I felt a jolt right here,” Montes places a hand over his heart, “and I knew with certainty that you were mine.”

Now Serenity absolutely hates King Montes. How could she not when he’s responsible for why her life is so hard, and why she’s experienced so many horrible things at such a young age.

Whenever Serenity punched him or cut him, it kind of made me happy. He deserved to hurt.

I hated the king too, but just like Serenity, I felt something for him. I was so conflicted during the entire book, because there was no excusing the king’s actions. I understood Serenity and her conflicted feelings, because I felt exactly the same! I guess that’s why I loved this book so much. I also loved Serenity’s character. She was such a badass and she didn’t care whether people liked her or not.

Montes may be a bad guy, but he was such a good guy to Serenity. She had him wrapped around her finger. He may have been tough on her sometimes, but he eventually caves in to her demands.
The ending.

I don’t know how to deal with it. I’m dying here.
GOODREADS | AMAZON