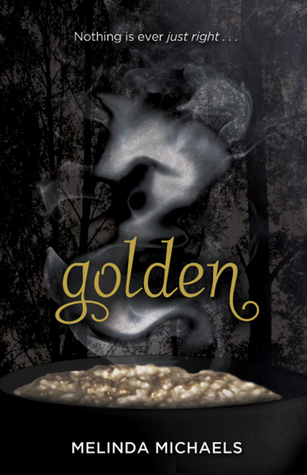 High school senior Hanna Loch just suffered a blackout in front of her entire homeroom class. She hasn’t had one in over ten years, and she’s terrified—the last time she blacked out, she woke up with no memory of her life before. To make matters worse, no one can explain why it happens. For Hanna, bad things tend to come in threes.
And that doesn’t even begin to cover it . . .
When she learns she could be a descendant of someone who lived /once upon a time/, Hanna must put her trust in William Vann, a descendant of one of the most hated villains ever known. Their histories are intertwined in more ways than she expected, and he has answers about her past, answers even her family won’t share.
But is it safe to put her trust in someone who appears to be danger reincarnate, while trying to escape the darkness that tried to kill her ten years ago?
A loose fairytale retelling, GOLDEN is a story that’s /just right/, weaving together lost secrets, vengeful enemies, and what happens when fiction becomes reality.

Copy provided by the author in exchange for an honest review.
Hanna just suffered a black out in front of her entire class. She hasn’t blacked out in ten years, so it isn’t exactly a normal occurrence. The nurse would not let her leave school, so she decides to leave on her own and skip class. Not really a good idea considering she almost died. She was almost ran over, but her life was saved by a boy.
William just arrived in town, but he’s already being taken to the police station. He just saved someone’s life, but that doesn’t matter, not when you’re a Vann.
I was suspicious of William. He was always there to “save” Hanna, but I kind of believed in him too. The contradiction is too much. I didn’t want him to be the bad guy, because I liked him.
Hanna’s parents were absent in her life. They left her with her grandparents while they were traveling. They had their reasons, but I just found their reasons to be petty and irrational. Real parents would never leave their child when the going gets tough. They may have had some explanations, but to me it just looked like they bailed because they couldn’t handle taking care of Hanna.
I found the fairytale aspect of this book to be very interesting. It was different and I wanted to read more about it. While the author did explain the fairytale aspect of the book, I just found it lacking. I wanted to know more about it.
Some people might find Hanna to be annoying. She never really listens to anyone and she does some stupid things. I didn’t really get annoyed because I understood her. She’s lost some of her memories. Her first memory starts when she’s eight years old. That is not normal, and people won’t tell her why. I got that it was extremely frustrating for her. People warn her about William, but they won’t tell her why. They act as if her questions are irrelevant and an inconvenience, so I got her.
This book was a quick read that I enjoyed.
GOODREADS | AMAZON