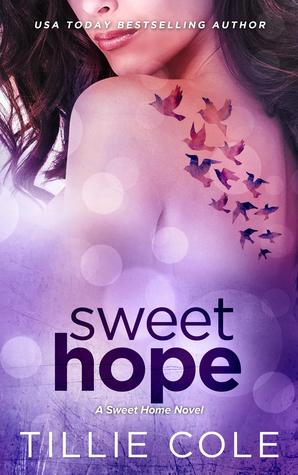 From the USA Today Bestselling Sweet Home Series, comes Sweet Hope.
My name is Ally Prince and I’ve always been unlucky in love. I don’t know why, I just always… have.
When all of my best friends were falling for their soul mates in College, I was left behind. I was Ally, the pretty cousin of superstar quarterback, Romeo Prince. I was Ally, the best friend to the most amazing group of girls I’ve ever known—a title I loved, but one I became tired of ‘just’ being. And I was Ally, the one on which they could all rely.
But to me, I was Ally, the girl with the heart no one had claimed… And I was, Ally, the girl, who underneath it all, was heart-breakingly lonely.
I LOVE love; the thought of it, the nervous excitement of falling for Mr. Right, the desire of someone becoming my entire world… of me becoming theirs. I’ve always wanted passion, heart-stopping, epic, life-changing romance… I’ve always wanted the fairytale… I’ve always wanted it all.
It just never seemed like I would get it.
For the past few years I’ve thrown myself into my career as a museum curator. I’m the best of the best, the person every museum wants to hire, so when an opportunity came up to move to Seattle, I jumped at the chance. My cousin and my best friend lived in Seattle and I needed a change.
I needed a new beginning.
I wasn’t expecting to meet anyone in the Emerald City. I wasn’t expecting to work closely with the reclusive new sculptor my all-important gallery design was centered around. And I certainly wasn’t expecting to fall for him… heart-stopping, epic, life-changing love…
My real life fairytale come true.
But, like in every fairytale, there’s a villain, a dark and tortured soul… I just didn’t know that the villain and the hero in my story would end up being one and the same.
New Adult Romance Novel—contains adult content, sexual situations and mature topics. Suited for ages 18 and up.

Oh my gosh this book!!! I LOVED IT SO MUCH. It shattered me. It healed me.
Elpidio. Haunted by his inner demons. Has guilt and regret festering inside of him so much that it cripples him. Beautiful but broken. His first exhibition is finally happening and he could not be any more unexcited by it. His sculptures are a depiction of what he’s suffered and lost in his life. It’s his shame and regret. He is so talented, but he cannot see it. He does not understand how anyone could think of him as anything other than a failure. He was so broken…then he met Aliyana.
Aliyana a.k.a. Ally cannot believe she has landed her ultimate dream job. She’s an art curator and she will be working with the elusive Elpidio. Elpidio’s art speaks to Ally, and she’s convinced that no one can do a better job of showcasing his art than her.
The first time they ever saw each other was magical. I could feel it. I could feel the magnetism between them and I was lost in their story.
“He was living, breathing poetry. Not love poetry, but the poetry which tears out your heart, rips it to shreds, pushes it back into your chest, and makes you question what the hell just obliterated your soul.”
Elpi was closed off to everyone, but Ally worked her way through those walls and eventually Elpi let her in. I loved that Ally accepted that what Elpi did was in the past, and the things that haunted him should be kept in the past. She helped him accept that your past does not have to define your future. I was just so happy that Ally has finally found the one for her, and I’m glad it was Elpi. They saved each other.
“Lei era speranza…She was hope. La mia luce… my light.”
So there was this song that Ally always played for Elpi on the piano titled “Kiss The Rain” by Yiruma; and there was this particular emotional scene in the book, and I decided to play the song while reading it.

Yeah, it totally wasn’t. I was a blubbering mess! The song fit the scene so much, but it was such a bad idea on my part because I couldn’t even concentrate on the words anymore. I was just crying like a total loser. It was just beautiful, the book, not me.
I was so happy that all the characters from the previous books were included in Sweet Hope. I love all of them so much!
Special shout out to Levi, I love you.
GOODREADS | AMAZON

Amazon & USA Today Best Selling Author, Tillie Cole is a Northern girl through and through. She

originates from a place called Teesside on that little but awesomely sunny (okay I exaggerate) Isle
called Great Britain. She was brought up surrounded by her English rose mother — a farmer’s
daughter, her crazy Scottish father, a savagely sarcastic sister and a multitude of rescue animals
and horses.
SOCIAL MEDIA LINKS
http://tilliecole.com
https://twitter.com/tillie_cole
https://www.facebook.com/tilliecoleauthor
https://www.goodreads.com/author/show/7074846.Tillie_Cole

Tillie is giving away a $150 Amazon gift card.
a Rafflecopter giveaway